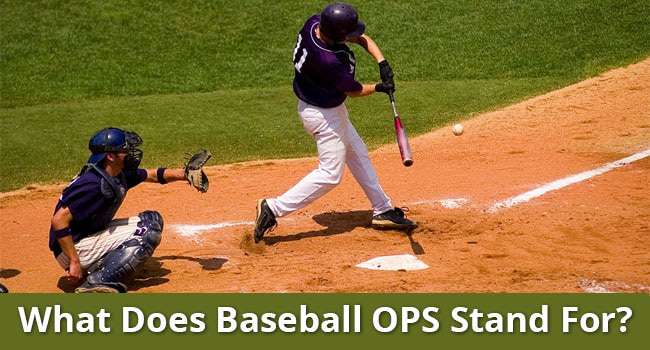 Baseball fans who like to play their sport with more vigorous analysis, engage in sabermetrics. It is a term that refers to the use of advanced statistics to understand the analysis of the game in a better way. One of the advanced statistics is OPS that measures the player’s capability to get on base and generate extra base-hits. Do you know what does baseball OPS stand for?

Quick Navigation
What Does Baseball OPS Stand For?
How to Calculate OPS?
What is the Equation for OPS?
OPS Can Be Represented as:
What Do You Mean by an Adjusted OPS?
When was OPS Accepted in Baseball?
What is OPS Scale?
Let’s Wrap Up

What Does Baseball OPS Stand For?

OPS stands for On-base Percentage plus Slugging. It is a sabermetric baseball statistic that calculates the sum of a player’s on-base percentage and slugging. It represents the ability of the player to get on base and to hit for power, which is the most offensive skill of the game. It can also be used in evaluating pitchers. It provides a static that accounts for a batter’s contact, patience, and power.

How to Calculate OPS?

OPS is the sum of the player’s on-base percentage and slugging average. It measures how often the players make it to first base, while the second gives analysts a way to measure how they hit the double, triple, or home run. Divide the pitch’s total number of hits, walks, and times hits by its number of times at bat plus walks, sacrifice flies, and times hits to calculate the OBP.

What is the Equation for OPS?

The basic equation of OPS is: OPS = OBP + SLG, where OBP stands for On-Base Percentage and SLG stands for Slugging Average, and these averages are defined as follows:

It is because the batter makes a trip to the plate; he is not given an “AB” when he walks or hits the ball into play, and is called out. But the action allows him a run to score in the SF scenario. As a result, the four counts in the denominator are needed to calculate a batter’s total trips to the plate.

OPS Can Be Represented as:

What Do You Mean by an Adjusted OPS?

Adjusted OPS or you can say OPS+ is a related statistic to OPS. OPS+ is the OPS adjusted for the park and the league in which a player played but not for the fielding position. OPS+ of 100 is defined as the league average, and OPS+ of 150 or more is excellent. If it is 125, then it is very good, and 75 OPS+ or below is poor.

When was OPS Accepted in Baseball?

Over the last couple of decades, OPS is a statistic born of the sabermetrics movement that attempts to capture batter’s value with one simple heuristic. You can determine OPS by adding together two other numbers.

OBP was developed by Brooklyn Dodgers executive Branch Rickey in the 1940s and 1950s and was adopted as an official statistic by Major League Baseball in 1923. OPS-sabermetrics statistics gained popularity in the late 1990s and early 2000s.

The first appearance of OPS on the baseball card was in the 2004 Topps set. The various components of OPS made their way to cardboard for more than 50 years, which starts from the full listing of doubles, triples, and home runs on the card of 1953 Topps set.

What is OPS Scale?

There are seven different categories for classification by OPS used by Bill James, who has been titled “The 96 families of Hitters”.

It transforms the OPS scale into a 7-point ordinal scale substituting quality labels for the A-G category that creates the subjective reference for OPS values. A player with an OPS of .9000 or above is considered as an excellent player. And, the player with a decreasing range of OPS becomes Average or a poor player. OPS lacks the factor to the runs created by the player.

What does baseball OPS stand for? It stands for On-base Percentage plus Slugging. It is used for empirical analysis, which gives a clear indication of how well a batter gets on base, and how good is his hitting power. OPS is obtained by adding two factors i.e., OBP, that is On-Base Percentage, and SLG i.e., Slugging Average.